Last month, I attended Webmaker Kitchen Party organized by one of the Mozilla ReMo Shahid Farooqui at his home in Allahabad. I enjoyed it mainly because it was organized for school kids, so everything was like fun doing. The main objective of this event was to make these kids aware about various products of Mozilla, how they can use them and how they can contribute to the community.
The event began with the introduction given by Shahid Farooqui. He told about his role in the community, various events organized by Mozilla and also gave brief introduction about various mozilla products like Webmaker, Firefox, Persona, Firefox add-ons(firebug) and also Firefox OS mobile phone. Then RMA Rahul Ranjan told about FSA program and how to join Mozilla community. After this we volunteers gave small introduction about computer, its parts, uses, internet and e-mail.

Then comes the best part: drawing making competition because the kids participated so enthusiastically and drew beautiful logos of Firefox and webmaker. The best two drawings were awarded with prizes. It was also a great meeting with Shahid Farooqui as i get to know lot about FOSS, conferences, Mozilla, FSA and WOMOS program.
I also got cool Mozilla stickers and Mozilla t-shirt. 😀 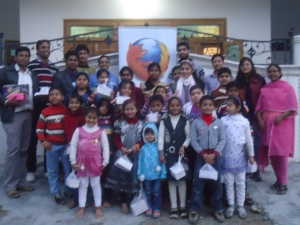 Overall it was a wonderful day!!

The blog is about my journey in the world of FOSS organization. Ohh !!! its more than that going through thousands lines of codes, debugging hundreds of errors and adding numbers of feature to various projects.